Dec. 4, 2017 • PLENARY TALK AT COBEP 2017Electrical and Computer Engineering professor, Amir Yazdani, addressed the XIV Brazilian Power Electronics Conference (COBEP 2017), as a Plenary Speaker, on November 20, 2017. He delivered a talk on Modern Power Electronic Converters for High-Voltage Direct-Current (HVDC) Transmission Systems, and also introduced the attendees to FEAS, Electrical and Computer Engineering Department, and Energy Systems Group at Ryerson University.
COBEP is the largest international conference in the area of power electronics in Brazil, which is sponsored by the IEEE and held biennially COPEB 2017 was held in Juiz de Fora, Minas Gerais from Nov. 19 through Nov. 22.

Oct. 10, 2017 • XAVIER FERNANDO TO SERVE AS IEEE HUMANITARIAN INITIATIVES COMMITTE CHAIR It is a one-year appointment, with the opportunity for it to be extended for an additional two, one-year terms.
The IEEE Canada Humanitarian Initiatives Committee is composed of volunteers from across Canada who are passionate about addressing humanitarian challenges with the appropriate application of technology. HIC Canada supports IEEE members in Canada that are participating in building relationships with organizations that will enable them to fulfill the IEEE mission to foster technological innovation and excellence for the benefit of humanity.
(Adapted from HIC Canada)

Sep. 13, 2017 • BIN WU ELECTED FELLOW OF THE ROYAL SOCIETY OF CANADA Dr. Bin Wu was one of 89 new Fellows elected by the Royal Society of Canada.
The elected Fellows are individuals from diverse backgrounds and disciplines, and they have been elected by their peers in recognition of outstanding scholarly, scientific and artistic achievement. Election to the academies of the Royal Society of Canada is the highest honour a scholar can achieve in the Arts, Humanities and Sciences.
This year's new Fellows will be inducted to the academies of the RSC during the Induction and Awards Ceremony, sponsored by the University of Calgary, on Friday, November 24, 2017 at the Fairmont Winnipeg Hotel in Winnipeg, Manitoba. (Adapted from the RSC announcement.) 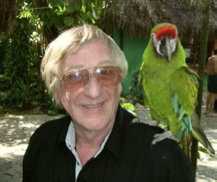 Sep. 5, 2017 • PAUL KANTOREK, IN MEMORIAM • Dr. Paul Kantorek was a member of the faculty in Electrical and Computer Engineering Department from 1981 to 2009.
It is with sadness, we announce that on August 3, 2017 Prof. RNDr. Paul Kantorek Ph.D., a well known writer, caricaturist, musician and scientist, passed away.
There will be a meeting "In Memoriam" on Sunday 10th of September at 6 PM in the meeting hall of the Church of St. Paul at 1424 Davenport Rd., Toronto, Ont. All friends are welcome. Please RSVP before September 8, to Pavla 416 744-6617. We would also appreciate some donations for his "In Memoriam".
(Text from the In Memoriam announcement).

Jul. 12, 2017 • NEW FACULTY • The Department welcomes Dafna Sussman to the faculty.
Dr. Dafna Sussman comes to Ryerson University from the Hospital for Sick Children in Toronto. Dr. Sussman completed her undergraduate in Engineering Science (Physics) with honours at the University of Toronto. She engaged in industrial optical engineering work at the National Research Council, and then pursued a Master's in Biophysics and Biophotonics at the University of Waterloo, and a PhD in Medical Biophysics and Clinical Imaging at the University of Toronto, in collaboration with Princess Margaret and Sunnybrook Hospitals. Since then, Dr. Sussman has completed a postdoctoral fellowship in Diagnostic Imaging and in Translational Medicine, both at the Hospital for Sick Children. Her biomedical engineering research program primarily uses Magnetic Resonance tools to probe early-life development and understand factors that alter developmental trajectories.

Jul. 12, 2017 • NEW FACULTY • The Department welcomes Larissa Schudlo to the faculty.
Larissa Schudlo holds a masters of applied science and doctorate from the University of Toronto in Biomedical Engineering. Her graduate work focused on brain-computer interface development as means of communication using near-infrared spectroscopy (NIRS). Prior to her graduate work, Larissa completed her bachelors of engineering in Electrical and Biomedical Engineering at McMaster University. Currently, Larissa was a post-doctoral fellow in the Autism Research Centre at Holland Bloorview. Her current research focuses on physiological signal processing for ambulatory health-monitoring applications and technology development for children with Autism Spectrum Disorder (ASD), as well as exploring the utility of NIRS in assessing children with ASD or concussions

Jul. 10, 2017 • JAMES LENNOX PACKHAM (1927–2017) • Packham, James Lennox, P. Eng. Professor Emeritus, Ryerson University, February 19, 1927 – July 3, 2017. Peacefully, in Toronto after a brief illness. Beloved husband of Marian Aitchison Packham for 68 years. Dearly loved by his son Neil and his wife Dale Wilson, and by his daughter Janet and her husband John McCann. Predeceased by his sister Frances Good of Beamsville Ontario. Remembered by many nieces and nephews and special family friends.
Jim was born and raised in Weston Ontario. He studied electrical engineering at the University of Toronto, graduating with a B.A.Sc. in the class of 1948. After 20 years of engineering and managerial experience in the electrical equipment industry with General Electric and with Sangamo, he joined Ryerson’s Electrical Department as a lecturer. He became Chair of that Department in 1970. He completed an M.B.A. in public administration at York University in 1975. In 1973, Jim was appointed as Ryerson’s Vice-President Academic and served in that role for seven years. Starting in 1980, he was associated with the office of the President and undertook a series of special projects for Ryerson. Concurrently, he was associated with the Department of Politics and Public Administration as a Professor of Public Administration for both full-time and part-time students. He retired in 1990. He was bestowed a Fellow of Ryerson Polytechnic Institute in 1992.
Jim’s hobbies included woodworking, skiing, sailing, travelling, and collecting and writing about antique tools. This involved designing and helping to construct their cottage buildings and furniture at Lake Joseph, starting in 1955. There were many years of travel in Canada, North America, Europe and Israel with Marian and close friends. His interest in antique tools included long-time participation in The Tool Group of Canada, as its newsletter editor for 10 years, and in the Early American Industries Association, as a member of its Board.
Cremation has taken place. A memorial gathering for family and friends will be held Monday, September 18 at 1:00 p.m. at Credit Valley Golf and Country Club, 2500 Old Carriage Road, Mississauga, Ontario. If desired, memorial contributions to the Student Bursary Fund at Ryerson University, www.ryerson.ca/supporting would be appreciated. Please visit our Book of Memories at www.wardfuneralhome.com. (Obituary and photograph from the July 8, 2017 Globe and Mail.)

Jun. 14, 2017 • $250K NSERC CRD GRANT • Naimul Khan was awarded an NSERC CRD Grant in partnership with SimentIT Inc. titled "A Novel Augmented Reality Framework for Enriching Museum Exhibits".
The joint project with Ling Guan and Andy Ye, aims to develop new, disruptive ways of experiencing museum exhibits through augmented reality. The developed technology will be deployed at the newly renovated Canada Science and Technology Museum in Ottawa. Total value of the grant is $375K ($250,000 from NSERC, $125,000 from industry).

Jun. 12, 2017 • COMMERCIALIZING INVENTIONS • Victor Yang is an engineering professor who is also a brain surgeon at Sunnybrook Hospital.
He has collaborated with students and Ryerson Futures to develop 7D Surgical, a groundbreaking image guided surgical navigation system that is now approved for use in North American hospitals.

May 24, 2017 • V. YANG ON CTV NEWS • Victor Yang was interviewed on CTV News about his research on spinal injuries.

May 24, 2017 • NSERC INDUSTRIAL RESEARCH CHAIR • Ebrahim Bagheri has been awarded the prestigious NSERC Industrial Research Chair in Social Media Analytics.
The motivation for the establishment of this chair, valued at $1.5 million over five years, is to develop a world-class research program and increased research capacity in the area of social and semantic technologies, and particularly their application to derive actionable insight through social media analytics.

May 24, 2017 • $150K NSERC RESEARCH GRANT • Muhammad Jaseemuddin and Xavier Fernando were awarded another NSERC Collaborative Research and Development (CRD) grant.
The joint research project is with industrial partner Peytec Inc. for the project titled, "A Scalable Wireless Positioning Sensor Network For Industrial Automation". Total value of the grant is $305,520 ($150,000 from NSERC, $75,000 from industry and $80,520 worth of industry in-kind donations).

May 15, 2017 • ESCH ENGINEERING INNOVATION AND ENTREPRENEURSHIP AWARD • The Norman Esch Engineering Innovation and Entrepreneurship Award 2016/17 was awarded to Sehar Rija, Sharif Mansour and Sergiu Mocanu for their Capstone project titled, "Reconstructive Surgical Assistant" supervised by Dr. Victor Yang.
Current methods of imaging three-dimensional anatomical features are bulky, expensive, and expose the patient to radiation. A novel approach has been developed with the use of the Google Tango tablet development kit to offer a cheap, portable, and non-irradiating imaging modality. With the use of structured light emitters and transducers on the device, the software, developed in Android Studio, is able to capture point cloud frames of its surroundings and its location and orientation in space and save it into a practical format. The exported data was then analyzed in MATLAB to manipulate the data through rotation, merging, and symmetry calculations. The proposed combination of the pieces of software offer alternatives for operating physicians to quickly image a patient’s anatomy and perform necessary analysis.

May 1, 2017 • CAPSTONE PROJECT PRIZE WINNERS • Below, is the list of Capstone projects that won prizes at the 2017 Open House. In addition to the Marzio Pozzuoli Award ($10,000), the Department Gold Award was a Samsung Frontier Watch (approx. $500 value), the Silver Award was an Eleduino Raspberry Pi 3 Super Integrated Computer Kit with LCD Monitor (approx. $200 value) and the Bronze Award was a Raspberry Pi 3 Complete Starter Kit (approx. $100 value). Each team member of the winning project received the corresponding prize.
The rest of the participants and projects can be found in the Open House photo album.
MARZIO POZZUOLI AWARD ($10,000)

Apr. 22, 2017 • DISTINGUISHED PROFESSOR THURAIRAJAH MEMORIAL AWARD • Xavier Fernando is the first recipient of the Distinguished Professor Thurairajah Memorial Award for outstanding technical achievements among Tamil diaspora. This award was given on April 22, 2017 at a ceremony at the Scarborough Convention Center by the TGTE, an international organization. Thurairajah was a leading Sri Lankan Tamil academic and vice-chancellor of the University of Jaffna.

Mar. 22, 2017 • PROFESSOR OF THE MONTH • Xavier Fernando was selected as Professor of the Month by the Ryerson chapter of the IEEE.

Mar. 13, 2017 • $380K RESEARCH GRANT • Xavier Fernando and Muhammad Jaseemuddin have been successful in securing a $380,000 grant from Ontario Centers of Excellence and Peytec Inc. for the project entitled: "Building a Fully Automated and Descriptive Asset & Inventory Management System for Advanced Manufacturing" under the Voucher for Innovation and Productivity II (VIP II) program.

Jan. 24, 2017 • SPRING TRANSITION • To all 3rd and 4th year COE and ELE students: This Spring we will be running a few select 4th year courses in the Spring Transition. More...

Jan. 16, 2017 • NEW FACULTY • The Department welcomes April Khademi to the faculty. A graduate of Ryerson, she was an Assistant Professor of Biomedical Engineering at the University of Guelph, and Director of the Image Analysis in Medicine Lab (IAMLAB), specializing in the design of algorithms for Pathology and Radiology images.